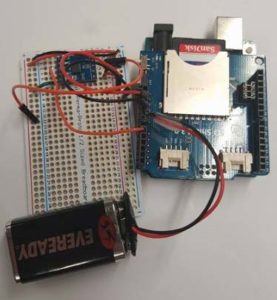 InPrint is a wearable tremor tracker designed for patients with Parkinson’s disease. Parkinson’s disease is the second most common neurodegenerative disease, affecting ten million people across the globe. The symptoms of Parkinson’s, which include tremors, slowness, instability, fatigue, depression, and anxiety, can be particularly debilitating both physically and emotionally. Many patients have individualized treatment plans, meant to maximize drug effectiveness while minimizing adverse reactions. However, these treatment plans must be adjusted as the disease progresses — and this process can take several months, due to factors like low patient compliance with demanding tracking systems, subjective data on treatments’ effects, and inaccurate logging of symptoms. During this adjustment period, patients can experience intensified symptoms until they arrive at a stable drug regimen.

Currently, Parkinson’s patients lack convenient tools to accurately record their symptoms, which delays the determination of a stable drug regimen by a neurologist. The InPrint team’s solution, honed through conversations and observations with patients and doctors, simplifies symptom monitoring. Their proposed device uses wearable circuit technology, applying a thin-film metal temporary tattoo (which can be easily worn in diverse settings) to provide regular, accurate tremor data in relation to drug usage. This could enable neurologists to quickly identify an effective treatment regimen — leading to a shortened adjustment time for the patient.