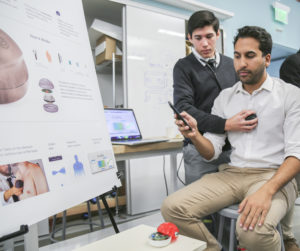 Tabla, a project created by students Adam Rao (a medical student at UCSF and a student in the UC Berkeley/UCSF joint PhD program in bioengineering) and Chen Bao and Jorge Ruiz (both 2017 Berkeley M.Eng graduates), has been named the winner of the student category of Fast Company‘s 2017 Innovation by Design Awards. With a judging panel that this year included Kickstarter co-founder Yancey Strickler and 99% Invisible host Roman Mars, the awards honor the best design ideas across a wide range of fields. Out of 2500 entries, Tabla is one of just 14 winners in this year’s competition.

Tabla is a low-cost, accurate device that uses sound waves to diagnose pneumonia. While the current clinical gold standard for detecting pneumonia is the chest x-ray, cost and other barriers can limit access to this method. Percussive physical examinations — in which a physician taps the sternum and back, assessing the resulting sounds — provide a convenient, low-cost alternative for patient diagnosis. Tabla is desgined to easily integrate with this common procedure, quantifying and charting changes in sound.