Design fellows bring unique perspectives to the Jacobs Institute. Fellows spend dedicated time in Jacobs Hall, participating in design activities and exchanging ideas with students and other members of the institute’s community. Each fellow contributes to the institute in a different way, in formats that range from open office hours to creative workshops. Students and instructors, we invite you to get to know the design fellows by checking out their bios and setting up a time to talk with them; learn more below. Zahin Ali is an interaction designer at IDEO Chicago where he leads design on interdisciplinary teams to solve ambiguous problems with human-centered design thinking practices. He engages in all stages of the innovation process: defining strategy, user research, identifying key insights, building and testing prototypes, product/vision storytelling, and working with development teams. As a design consultant, he works with a growing portfolio of global clients in a range of industries such as automotive, healthcare, education, and financial services. Agnostic of product or medium, he has a penchant for building meaningful, human-centered interactions. He believes that good design is about thoughtful negotiations between people and technology. His superpower is articulation with expertise in communicating ideas with a storytelling approach and tackling problems by asking the right questions. As of late, his interests are in experimenting with collaborative design thinking methods, specifically around strategic prototyping. In a prior career, he leveraged his Berkeley IEOR degree to play a role in Tesla achieving high volume manufacturing during the early days of the Model S program. He then made his way to design in an unconventional path via startups, a stint with the NASA Jet Propulsion Laboratory, and with graduate work from Art Center College of Design and the Carnegie Mellon University School of Design where he earned a Masters in Interaction Design. Contact Zahin to schedule a meeting during office hours, Friday 3-7pm, with the exception of January 31, February 7 and 14. Jaewoo Chung, Ph.D, is a UX leader and technologist trained in the field of UX Design, HCI, Computer Science, Music Composition and Psychology. He received his PhD from the MIT Media Lab. Jaewoo has been working in industry and academia for more than 20 years, dealing with various topics such as multi-modal interaction systems (voice, gesture, touch), intelligent systems for mobile and wearable, virtual/mixed reality, IoT, decision support systems, and smart homes. He is currently Head of UX Design and Research @ HP and previously, he was the Director of Next Experience Display Lab @ Samsung. Contact Jaewoo to schedule a meeting during his office hours, Wednesdays 9am-3pm (preferred) or Fridays 9am-2pm. Sara Cinnamon is an Associate Director at LUNAR Design in San Francisco. LUNAR is a product design firm that joined the McKinsey & Company family in 2015, adding a depth of business strategy to their innovative spirit to deliver ingenuity that delights. Her areas of expertise include medical devices, inclusive design, efficient design for manufacture and assembly, and systems thinking. As an alumna of UC Berkeley Mechanical Engineering, she looks forward to sharing what she’s learned since graduation — from her time in grad school at MIT to running her own startup in consumer healthcare to joining a world class design firm. Book a meeting with Sara during her fall semester office hours on Fridays from 9:30am-11:30am in 310D Jacobs Hall. Drew McPherson is a mechanical engineer with an interest in assistive technology, mechatronics, human-centered product design, and rapid prototyping. He is currently developing undergraduate course material in 3D printing and bio-engaged electronics and recently co-taught a course on Prosthetic Hand Design in the Jacobs Institute for Design Innovation at UC Berkeley. He earned a M.S. in Mechanical Engineering at UC Berkeley during which he focused on bio-inspired design, biomechanics and product design, mechatronics. He co-founded EnableTech, bringing students together with community members with disabilities to create prototypes to address daily challenges they face. He also served as a TOM (Tikkun Olam Makers) fellow attending, facilitating and mentoring at international and local makeathons of assistive technology for people with disabilities. Contact Drew to set up a meeting during his spring office hours on Fridays from 11am-1pm, or find him in 310D or the first floor makerspace. 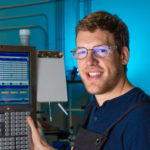 Eric Weinhoffer is a mechanical engineer specializing in product design, rapid prototyping, and scaling from prototype to production. Currently, Eric is the Lab Manager for Astranis. Previously, Eric designed products and ran a prototyping shop at Bolt. He has designed and shipped a variety of products, including technology demonstration payloads to the ISS, CNC milling machines (the Othermill), and a variety of consumer devices. When not making parts at home, Eric enjoys riding bikes and spending time in the mountains. Contact Eric or find him in 120 Jacobs Hall (in the makerspace) from 1-5pm on the following Fridays: January 31, February 28, March 20, April 24, and May 29.