The Jacobs Institute Innovation Catalysts, made possible by the Eustace-Kwan Family Foundation, is a grant program that helps Berkeley’s student innovators unlock potential in their projects. Following the successful inaugural grant cycle in the spring semester, we are pleased to announce our new cohort of grant recipients.

Over the course of the fall semester, the new grantees will develop their projects, with the support of funding, mentorship, and other resources at Jacobs Hall and the CITRIS Invention Lab. The nine projects in this grant cycle tackle a wide range of design and technology challenges, from developing wireless underwater communication to exploring speculative futures for biosensing in public spaces. Read more below about the winning projects and what the grantees plan to accomplish this semester.

Ignite grants help push projects to the next stage, by providing support for students to refine existing prototypes with demonstrated potential for impact. This fall, seven teams will draw upon funding (up to $2000) and other grant resources to develop their projects further.

ARInstructions
Brian Aronowitz, Vedant Saran, & Bryce Schmidtchen
The ARInstructions team dreamed up their project after working in makerspaces that use written online modules for equipment trainings. In seeking better ways to teach novice makers how to use equipment, they realized that Augmented Reality (AR) technology provided a powerful tool, with its ability to localize information spatially. Over the summer, the team developed a first prototype: an AR instruction set for using a vinyl cutter that can be viewed on an iPad. The team will spend this semester continuing to develop and refine instruction sets for more equipment, with the goal of improving the learning experience for makerspace users and exploring a novel use of this technology. Ava
Pancham Yadav, Amay Saxena, & Aaryaman Sen
Though the idea of personal mobility has changed dramatically in the last decade, as autonomous vehicle technology have evolved, trust remains a key problem. The team behind Ava asked, “How might we design rides in self-driving cars to be trustworthy, social, and productive?” and created a robotic assistant that lives in an autonomous vehicle and acts as the hub for the rider experience. They currently have a proof-of-concept prototype that simulates the experience of interacting with the robot within an autonomous vehicle. The Ignite grant will help the team start the more hardware intensive stage of their project; they plan to rapidly iterate on Ava’s hardware and industrial design and build a simulation environment in which to conduct user tests. 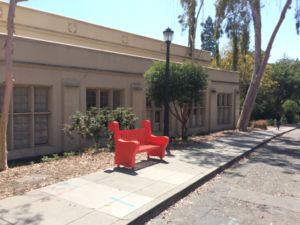 BaBench: Exploring Speculative Futures for Biosensing in Public Space
Noura Howell
BaBench is a bench embedded with heartbeat sensors, data sonification, and participatory feedback. It examines the potential impact of biosensing technologies on our sense of self, social relationships, and the experience of daily life. In contrast to efficiency and surveillance, the biosensing technologies in BaBench are used to explore a speculative alternative vision of public space centered around rest, emotional reflection, and sharing space with strangers. Currently, the bench exists as an early prototype, with electronics housing and equipment for recording and playing back heartbeats. The grant will support refinement and integration of component functionalities in order to make BaBench robust enough for public deployment.

Robert Schultz, Justin Olshavsky, Aurko Shaw, & Ikennah Browne
Despite best care practices in cardiopulmonary resuscitation (CPR), one third of patients who survive cardiac arrest suffer from permanent neurological dysfunction. There are known techniques for protecting the brain while the heart is arrested, but they require specialized teams and are not timely in emergencies. This team’s solution is a catheter that reduces the potential for neurological dysfunction and brain death at the time of cardiac arrest. Their next step is to create a to-scale functional prototype of the catheter and to test it, with the support of the Ignite grant as well as the guidance of UCSF cardiac surgeons and neurosurgeons.

JARL (Just Another Robotic Limb)
Josephine Koe, Shayna Kothari, Brent Yi, Maggie McDonough, & Justin Lu
The JARL team received an Ignite grant in spring 2018 to develop a low-cost, wheelchair-mounted robotic arm for assisting individuals with physical disabilities that limit their ability to perform daily activities. With their initial grant, the team made significant progress both in the mechanical and controls aspects of JARL. The team reapplied for an additional Ignite grant to continue developing the project, as they work to create a version of the arm that is sleeker, more compact, and simpler to assemble than previous iterations. Their goal for the semester is for a wheelchair user to be able to use JARL to drink a glass of water. Wearable Data Diary of Dystonia
Vivian Liu
Blepharospasm is an eye movement disorder in which uncontrollable muscle contractions (called “dystonia” in medical terms) lead to impaired blinking and can interfere with daily activities such as socialization and driving. As a rarer condition, there is little consensus amongst medical professionals about its diagnosis and treatment; part of the problem is that it is difficult to document how patients fare outside the hospital. Liu seeks to create create computer vision-augmented glasses that can serve as a data diary for each individual’s experience with blepharospasm. She has created initial prototypes of the software and hardware; one of her goals for the semester is to fully integrate the two. Another goal is to replace the current prototype’s camera with a more stably-housed and powerful one.

Wireless Underwater Communication Between Electronics Beacons and ROVs
Parsa Taleb, Jesus Navarro, & Shayan Javaherian
This Ignite grant team addresses the challenges of wireless high frequency underwater communication. Physical wired cable is expensive and constantly risks damage from various natural elements. Currently, however, wireless underwater communication is limited to advanced military communication and relatively short distances. This team’s solution is the implementation of cheap, compact, and autonomous ROV robots that can communicate with each other in a series. The team has used their initial prototype, a market toy submarine, to test out controls and wireless communication over short distances. The next phase of their project is to apply their findings toward building a fully integrated, original prototype, which they will test at the end of the semester.

Spark grants provide up to $500, as well as other resources, for early-stage projects or experimental concepts. Two project ideas will come to life this fall with the support of the Innovation Catalysts.

Smart Spine
Stephen Shelnutt
The Smart Spine is a simple, non-intrusive device that alerts the user when his or her posture is improper. Through wireless technology, the Smart Spine detects when the user has poor posture and prompts them to correct it. The device focuses on correcting poor posture habits rather than forcing correct posture on the user, promising a lifetime of good health in a short amount of time. Shelnutt has investigated several possible methods to realize the project concept and chosen the most promising one to develop as an initial prototype, with support from the grant.

We’ll share updates as these teams develop their projects this semester — and you can see their work in person at the Jacobs Winter Design Showcase in December.

Learn more about the Jacobs Institute Innovation Catalysts, including when the spring 2019 application opens later this fall.